Bitcoin’s recovery from last week’s catastrophic drop to $3,700 continued on Tuesday as the digital asset briefly topped $5,500 before pulling back below $5,400. The improvement in the crypto market’s price action appears to have received a boost from today’s White House press conference which saw the U.S. Treasury Secretary Steven Mnuchin confirm reports that the Trump Administration would support a $1 trillion dollar Coronavirus response package.

The stimulus aims to provide a swift intervention to small businesses, various industries, and citizens who have all been hit in the pocket book by the spread of COVID-19.

Aside from the fear of the pandemic wreaking havoc on the health of millions of people worldwide, the halt of the global economy has been one of the primary factors which continue to negatively impact equities markets.

What the market has been waiting for is more resolute, clear messaging from world governments that intervention will be taken to stem the spread of the virus and also stabilize ailing markets. Today appears to be the first step toward that.

At the time of writing, Bitcoin continues to trade in the $5,050 to $5,400 range and the price is encountering resistance at $5,500. The 1 and 4-hour timeframe shows a progression of higher lows and a positive development is Bitcoin appears to be on the verge of flipping the $5,400 level to support. 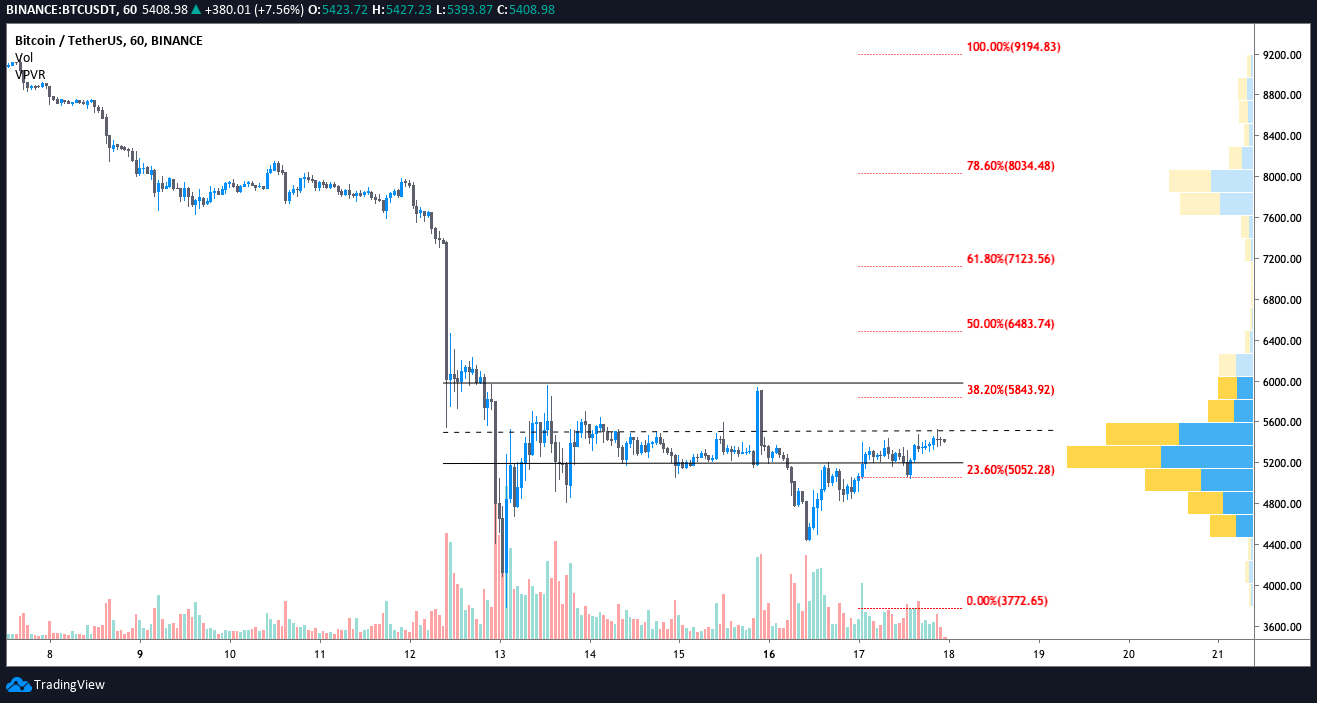 This would at least allow the price to consolidate within last week’s range of which extended from $5,200 to $5,600 and better position traders for a run at $6,000. 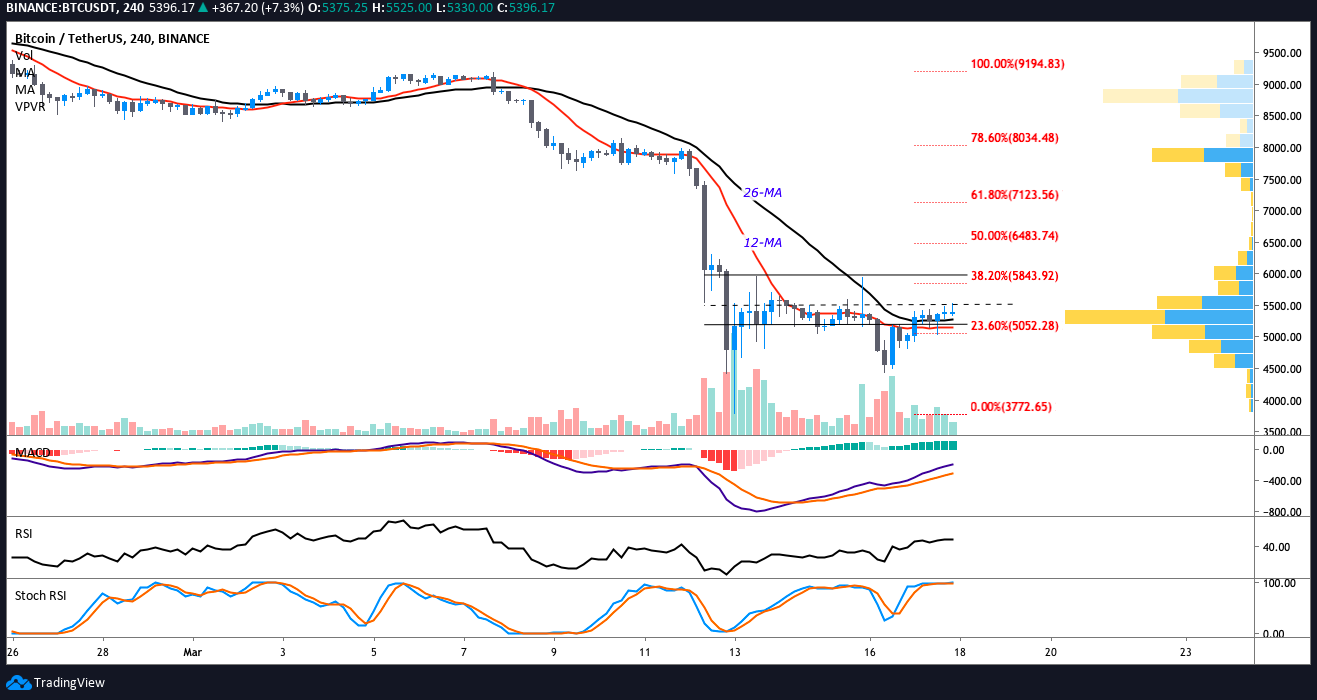 Currently the price is attempting to push above the high volume node of the volume profile visible range (VPVR) at $5,456 and doing this would allow traders to pursue a daily higher high above $5,638 and $5,973.

As mentioned in a previous analysis, the VPVR on the daily time frame shows a gap between $6,300 to $7,200, but the price would need to push through the potential resistance at $6,400 to complete this move.

Momentum builds but a retest of lower supports is necessary

Earlier today, Cointelegraph contributor Micheal Van de Poppe posted the following chart and explained that testing either the resistance at $6,000 and $6,400 would tap overhead liquidity and close a CME gap between $5,900-$6,000. Van de Poppe expects Bitcoin price to reject at $6,000 or $6,300 and he explained that:

“For a full trend reversal, investors should generally expect the lower levels to be tested for a double bottom formation. Another argument would be a bullish divergence on higher time frames, which usually implies a bottom structure.” 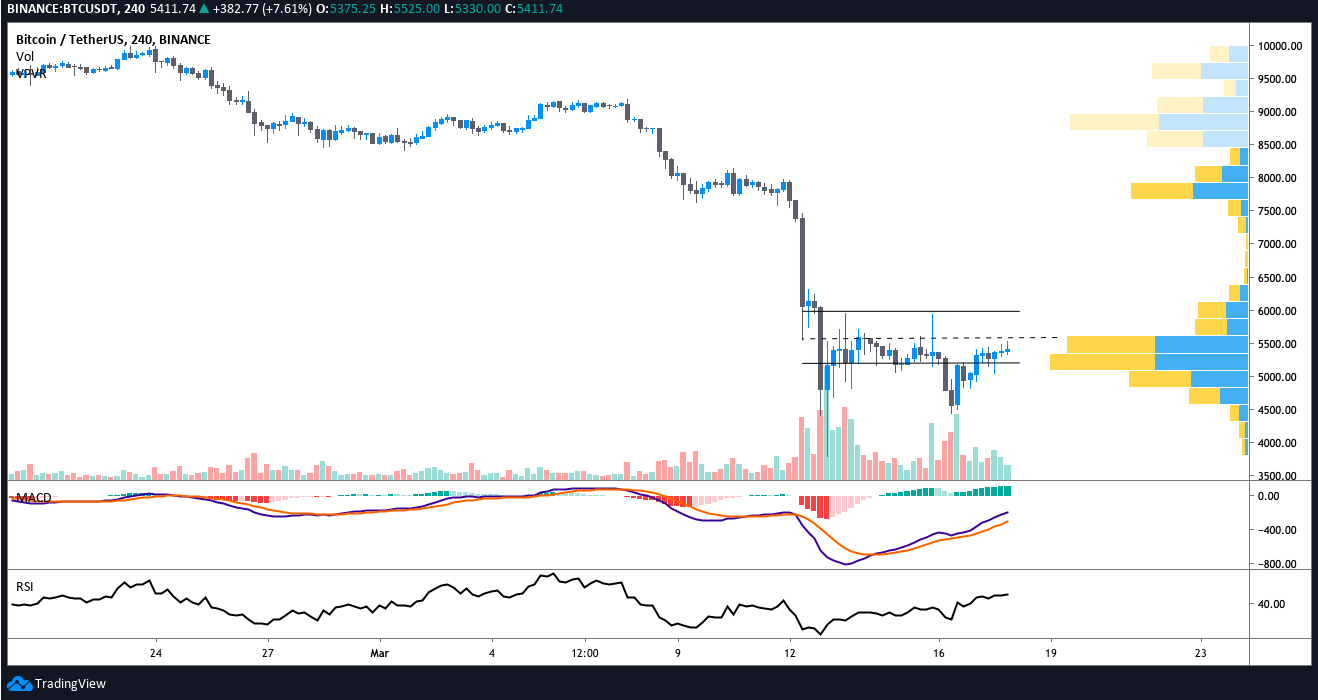 On the lower time frames we can see the relative strength index (RSI) continuing to rise toward bullish territory and while the 4-hour moving average convergence divergence (MACD) is still bullish indicator’s histogram shows momentum slowing down as the dark green bar lightens in color and the gradient begins to diminish.

One can also see Bitcoin price losing momentum as the candlestick wicks become longer at each close and the price is wedged between a VPVR support at $5,335 and overhead resistance at $5,450.

What’s next for Bitcoin?

On the daily timeframe Bitcoin price is still oversold, even though over the past few days the RSI has pulled up from 15 to 30. A positive is that daily purchasing volume is increasing and as this continues to occur, Bitcoin will have a much better chance to push through the VPVR volume gap to attack $7,200.