Over the past two years Bitcoin (BTC) futures trading on CME (Chicago Mercantile Exchange) has grown in importance for institutional investors. However, a popular misconception among traders is to attribute an unwarranted amount of importance to futures market activity and its impact of spot prices. It is important to highlight that despite trading under the BTC ticker, CME futures are financially-settled and therefore does not involve the actual exchange of Bitcoins.

Lately, the topic of open interest on Bitcoin options has been an extremely popular topic of discussion in crypto media and crypto Twitter but from what I can see, many investors misunderstand how the metric works and what it means in relations to Bitcoin price action.

In simple terms, open interest is the total number of futures contracts held by market participants. For every trade that goes through CME, a client must be willing to long, hoping for an uptrend, while the other party necessarily will be shorting the instrument.

How should investors interpret futures data?

A common mistake is to assume that lower daily trading volumes arise from investors’ lack of interest in a derivative. If most of the market participants are carrying their position, there could be little to no trading activity despite high skin in the game for both sides.

As shown by the above CME Bitcoin futures total open interest and volume chart from Skew, we can see that from December until mid February open interest was vigorously rising but what does this actually mean?

Crypto traders sometimes forget that CME Bitcoin Futures have a monthly expiry. Unlike Bitmex and Binance Perpetual Futures, Bitcoin’s CME future contract has a fixed settlement date which is always the last Friday of every month.

This could partially explain the Open Interest reduction seen over the last 2 weeks of February to $210 million from its $338 million peak (-38%). Coincidently the movement happened as the bullish trend became exhausted after a 55% rally in Bitcoin’s price since December 2019.

Average daily volume on CME has been $376 million for the past 4 months, although March is trending 35% lower. In February, comments from U.S. Treasury Secretary Steven Mnuchin about cryptocurrencies being used as “the equivalent of old Swiss secret number banking” could have played a role in diminishing institutional investors’ appetite for Bitcoin exposure.

Frequently, comments from the Trump Administration, as well as those made directly by the president, impact investor sentiment and the decision they make regarding their crypto investments.

Despite the recent drop average volume for the past ten sessions remains some healthy 8% above Q4 2019. Thus, the Feb. 18 trading volume of $1.1 billion on CME seems to be more of an outlier rather than a new norm.

Overall Bitcoin trading volume – including regular exchanges – should also be taken into account. According to a Bitwise Asset report, CME Bitcoin futures as a percentage of the average daily volume of the top-ten significant spot markets significantly increased throughout 2019. 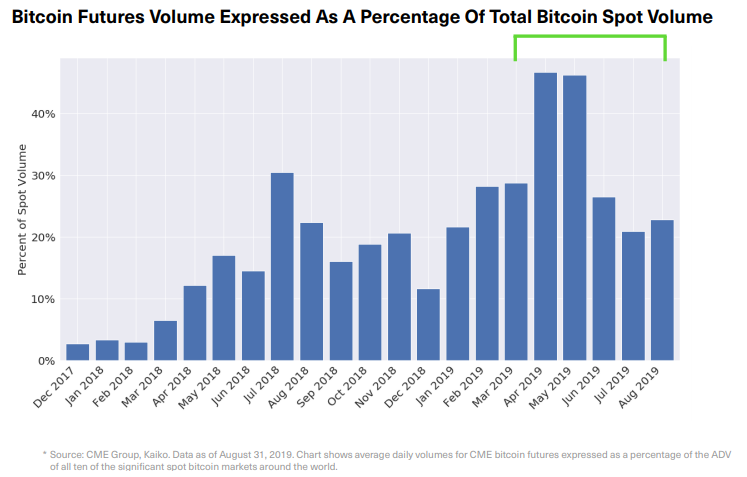 Many retail investors frequently say that institutional investors are driving Bitcoin price and there is some evidence to support this statement. First of all, the Open Interest of $338 million (32,000 BTC) represents a considerable amount compared to spot market activity. Less than a year ago a single order of 5,000 BTC on Bitstamp was directly linked to a nearly 20% flash crash on every exchange, including CME.

One thing that is important to remember is that causation does not equal correlation. Even though the price movements preceding the expiry are undeniable, there’s no clear indication those have been triggered by institutional investors’ flow. Any trader outside CME could have been using the expiry calendar as an excuse to reduce its position or even short it using derivatives. From a trader’s point of view, it is not possible to affirm where the movement initiated.

Arbitrage between exchanges, including derivatives, occurs in microseconds. There is no way to pinpoint whether trading volume increase started on a single venue. In fact, some quant traders use precise techniques in order to avoid such detection. The only possible conclusion here is that any affirmation whether institutional investors are driving up/down the price is a mere speculation.

Is derivatives trading unhealthy for the crypto sector?

No. The launch of CBOE and CME Bitcoin futures back in December 2017 marked the end of abnormal price deviation amongst the top cryptocurrency exchanges. According to the Bitwise report such price differences are now below 0.10% most of the time, primarily due to new market participants and additional liquidity brought by derivatives contracts.

Every margin trader eventually needs to cover the trade and derivatives were designed to work as a hedging instrument, thus their overall impact is beneficiary. The existence of a regulated instrument which allows investors to bet on the downside is evidence that market price isn’t easily manipulated.

It’s important to keep in mind that every derivatives trade needs a buyer and a seller. Volatile price movements happen simultaneously on multiple markets and this complicates the task of pinpointing its origin. Thus investors who factor derivatives markets data into their trading regime need to understand that a drop in volume does not translate to lack of interest.

That could be true for open interest suddenly decreasing although one has to consider expiry calendar and sharp price moves that liquidate positions.

Price and open interest movements can also partially be explained by the threat of new regulation as recently illustrated by U.S. Treasury Secretary Steven Mnuchin’s comments.

The views and opinions expressed here are solely those of the (@noshitcoins) and do not necessarily reflect the views of Cointelegraph. Every investment and trading move involves risk. You should conduct your own research when making a decision.